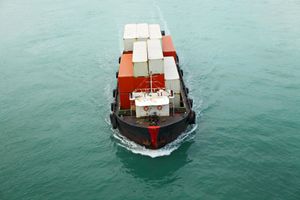 The High Court Division of the Supreme Court of Bangladesh has admiralty jurisdiction, i.e the court of first instance for admiralty suits.

(1) The High Court Division shall be a Court of Admiralty.

(2) The Admiralty Court shall have jurisdiction to hear and determine any of the following questions or claims:

(b)   any question arising between the co-owners of a ship as to possession, employment or income of that ship;

(c)    any claim in respect of a mortgage of or charge on a ship or any share therein;

(e)    any claim for damage received by a ship;

(f)    any claim for loss of life or personal injury sustained in consequence of any defect in a ship or in her apparel or equipment, or of the wrongful act, neglect or default of the owners, charterer or persons in possession or control of a ship or of the master or crew thereof or any other persons for whose wrongful acts, neglects or defaults the owners, charterers or persons in possession or control of ship are responsible, being an act, neglect or default in the navigation or management of the ship, in the loading, carriage or discharge of goods on, in or from the ship or in the embarkation, carriage or disembarkation of persons on, in or from the ship;

(g)    any claim for loss of or damage to goods carried in a ship;

(h)   any claim arising out of any agreement relating to the carriage of goods in a ship or to the use or hire of a ship;

(i)     any claim in the nature of salvage of life from a ship or cargo or any property on board a ship or the ship itself or its apparel, whether services were rendered on the high sea or within territorial waters or inland waters or in a port, including any claim arising by virtue of the application by or under section 12 of the Civil Aviation Ordinance, 1960, (Ordinance XXXII of 1960) of the law relation to salvage to aircraft and their apparel and cargo;

(j)     any claim in respect of towage of a ship or an aircraft;

(k)   any claim in respect of pilotage of a ship or an aircraft;

(l)     any claim in respect of goods or materials supplied to a ship for her operation or maintenance;

(m)any claim in respect of construction, repair or equipment of a ship or dock charges or dues;

(o)   any claim for disbursements made on account of or for the purpose of a ship by the Master, shipper, charterer or agent of the ship;

(p)   any claim arising out of an act which is or is claimed to be a general average act;

(q)   any claim arising out of bottomry or respondentia;

(r)     any claim for forfeiture or condemnation of a ship or of goods which are being or have been carried, or have been attempted to be carried, or for the restoration of a ship or any such goods after seizure, or for droits of admiralty together with any other jurisdiction to grant reliefs as are provided under the provisions of the said Ordinance or any other jurisdiction which was vested in the High Court Division as a Court of Admiralty immediately before the commencement of this Act and any other jurisdiction as to any matter in connection with ships or aircraft which has by custom been exercised by the High Court Division as a Court of Admiralty.

(3) The jurisdiction of the Court of Admiralty in case of a ship, under Sub-Section (2)(b) includes power to settle any account outstanding and unsettled between the parties in relation to the ship, and to direct that the ship, or any share thereof, shall be sold, and to make such other order as the Court thinks fit.

(4)  The reference in sub-section (2)(i) to claim in the nature of salvage includes a reference to such claims for services rendered in saving life from a ship or an aircraft of in preserving cargo, apparel or wreck as, under any law for the time being in force, are authorized to be made in connection with a ship or an aircraft.

(5)  The preceding provisions of this section shall apply-

(a)  in relation to all ship or aircraft, whether Bangladeshi or not and whether registered or not and wherever the residence or domicile of their owners may be;

(c)  in relation to mortgage and charge, to all legal and equitable mortgages or charges, including mortgages and charges created under foreign law whether registered or not:

Provided that, nothing in this sub section shall be deemed to be applicable to money or property recoverable under the said Ordinance.